We pride ourselves with being able to make your wedding reception a rockin’ party. But did you know that we can also help you plan and complete your wedding ceremony? With non-denominational officiants on staff, we are able to preside over your ceremony.

Planning your non-denominational ceremony can be difficult, too. While many people opt for traditional vows and rings, many also want to incorporate an additional ritual which represents their bond as a married couple. We’re all for keeping it simple, but it is also very exciting to see something new and unique at a ceremony. Here are four alternative ideas for your wedding ceremony: 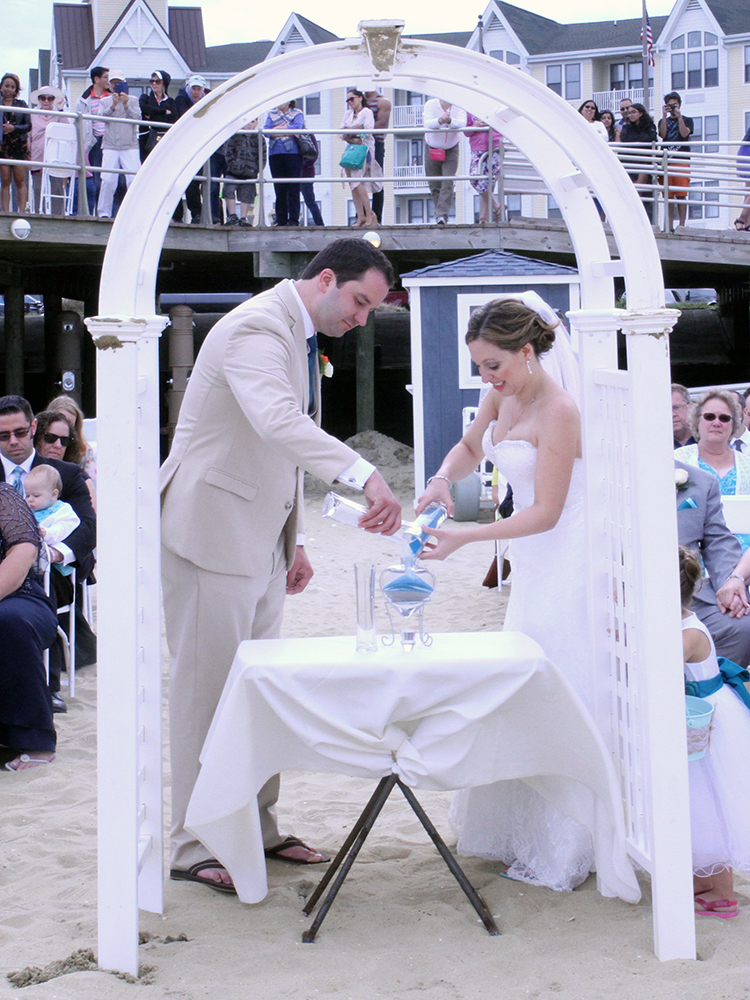 Probably one of the more popular non-traditional wedding rituals, the wedding couple pours two different sands into one larger container, symbolizing their merging as one. This is a great ceremony for beach weddings, but it’s also simply sweet in that the couple can keep their final creation forever.

Tip: make sure the container you’re pouring sand into is large enough! You don’t want to slow things down with a slender bottleneck on the receiving vessel.

Early marriage rituals have included a knotted rope in some fashion and similar rituals are appearing today. This can include handfasting, where the officiant loops and fastens a rope around the hands of the couple, or a knot-tying ceremony where the bride and groom tie two ropes together. Like the sand ceremony, the act symbolizes the unity of the individuals.

Tip: Handfasting can be done with a simple overhand knot, but if you’re looking to literally tie the knot, plan how you’re going to tie it. You don’t want to accidentally tie a slip not during your ceremony! Also, unlike fabric, using a thicker piece of rope will also keep the knot nicely visible

As a couple in the act of marriage, it’s nice to incorporate new life into the ritual. Consider establishing your bond by, together, planting a tree or another potted plant. By mixing many elements—water, earth, life—into a container, you have a lot of space for developing a narrative around your ritual.

Tip: Do as much as you can to in advance to pre-plant your tree. You don’t want to be moving around a lot of dirt or you risk becoming dirty yourself.

For the couple that really wants to push it to the limit, there is the science experiment ritual. Similar to the sand ritual, the bride and groom will pour two substances into a container for a reactive ceremony! If you’ve ever built a volcano in middle school, you know what you need. And what type of bond is stronger than a chemical bond?!

Tip: Practice and measure out your materials accordingly. Too much baking soda and vinegar can lead to a sticky mess. Be sure to have a container underneath your primary receiving vessel in order to catch the overflow.